Differences in naming of celestial objects have impeded our ability to develop a common understanding of the heavens. The stars and constellations so familiar to us are known by many names and configurations depending on your culture of origin. The same is true of man-made objects orbiting Earth. Without a common classification of the items and of the relationships between them, the cataloging, tracking, and management of orbiting objects in relation to other objects such as ships and airplanes is nearly impossible.

SAIC's customers in the space domain have an urgent need to better integrate their space object data both technically and conceptually. Although it is costly and time-consuming to manage and integrate exponentially growing data, the task is vitally important for command and control missions. In order to leverage new technologies and support missions, space domain operators require graphical representation and analytical management of space object data. A well-formed knowledge model based on an open-standard ontology could serve as the cornerstone of effective space situational awareness while contributing to all-domain command and control.

The process of developing a well-formed knowledge model for space situational awareness starts by identifying and clearly defining the entities, entity attributes, and processes. These entities make up the class terms that are placed into taxonomical hierarchies, along with logical relationships that facilitate reasoning with the entities, i.e., ontologies.

Ontologies provide relevant, formal specifications of concepts and relationships to entities, and, therefore, the data is linked to its meaning. For instance, we tell a computer that birds are feathered creatures that fly; now when the computer encounters feathered flying objects, it will associate that unknown object with a bird. This allows artificial intelligence to assist us in generating integrated knowledge graphs using instance data or to link to existing data across disparate sources, resulting in the integration of large data sets based upon common semantics.

The resulting framework can create critical benefits. Analysts can access and reason with the more diverse data in much more insightful ways. AI intelligent agents can support applications such as object resolution and integration of data across disparate domains.

Think about this concept in relation to sheet music. The notes on sheet music are universal. Regardless of nationality, instrument, player, and time of day, a Middle C is always a Middle C. Because everyone is operating from a common understanding of a Middle C quarter note, we can construct a master score that weaves together all the instruments and use that to teach an artificial intelligence how to operate within the construct. Is your percussionist sick and you need to have a synthetic drummer sub in? That’s possible thanks to a musical ontology. 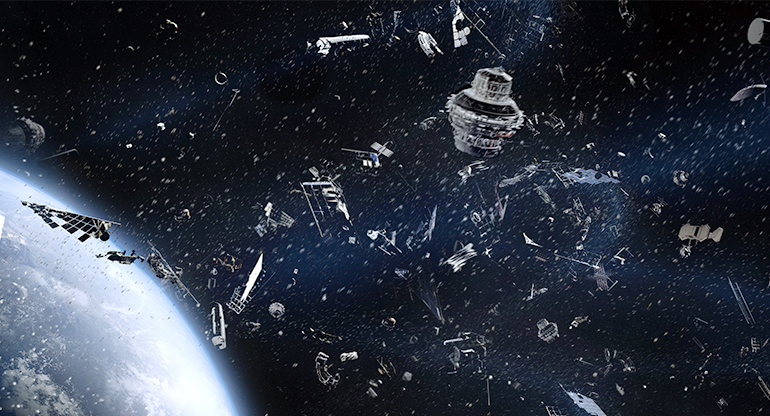 Now imagine an ontology-based knowledge model that includes an understanding of how a particular note will be played by an instrument within a genre. Now the model provides relevancy for perhaps a new musical production. New applications of music are now possible thanks to the musical ontology and resulting knowledge model.

Leveraging a space object ontology, however, has been challenging in practice. To widely implement ontology-based knowledge models to solve real-world data management and analysis problems, careful consideration of an ontology’s structure, available data, and the target technology stack is required. We are confronted with confusions of data terms and standards that make rapid formulation of a common knowledge model difficult.

At SAIC, we are exploring novel ways to automate the development of domain ontologies. We are also exploring ways to manage the integration of the knowledge model with the onslaught of big data. Our solutions can take advantage of hybrid database configuration and AI to transform unstructured data to structured graphs. We are also investing in ontologies that enable digital engineering for complex systems — developing ontologies for data fusion and reasoning via data analytics.

With both the population of objects in Earth's orbit and complexity of the space domain growing, the space community is having trouble keeping track of what’s in orbit and the sea of data sources coming in from the plethora of satellites and other orbiting objects. It is important to organize and manage this data to ensure and maintain a safe and sustainable orbital environment. Developing an ontology-based knowledge model will help to promote communication and a common understanding of the entities in the space domain.

Leveraging internal investments, our domain experience, and industry relationships, SAIC is poised to achieve celestial harmony with everyone on the same sheet of music for the space domain. SAIC is bringing innovation and order to those who face command-and-control challenges. Emerging needs of the future, like space traffic management, will benefit from our space ontology efforts today.

Read other blog posts from >